A WordPress developer's thoughts on professional and personal development. Written by Karin Taliga

What I learnt from an unexpected trip to the ER

For the better part of my life, I treated my brain as a machine. While I intellectually knew at some level that we are humans and not robots, I didn’t really think much about it and expected everything to take care of itself.

Like a kind of perpetuum mobile – the brain would get kick-started when life begins and just keep on going until everything stops at death. No need for manual interference or service. Or breaks.

It was as if I could do anything, without consequences. I didn’t really give any thought to what I did to the brain at all. Things would magically sort themselves out during sleep and the next day I could do it again.

But it’s not like I was taking care of sleep either. I treated it as this annoying optional extra. The quirk we have as physical beings that forces us to shut down for a significant portion of the day.

I was going full speed ahead, both working physically hard and using mental training to visualise my end result and handle any stage nerves.

It was not until way long into adulthood that I learnt about the effects of over-training on the body and the importance of planning recovery periods. But I kind of siloed off that knowledge to only apply to things like the muscles and tendons. It never occurred to me that it would apply to other parts of me too.

I still treated my brain as machine-like. An unchanging black box. “Enter this as input at one end, get that as output on the other end.”

I paid the price when I burnt out and had to learn a very harsh lesson that this is not the case. I now see things very differently.

And this winter, I got another reminder that the brain is more sensitive than we tend to think.

An unexpected trip to the ER

I was standing in the kitchen one night cleaning up after dinner. I heard my kids playing in our bedroom. Lots of laughing and screaming – they were having a pillow fight.

Suddenly I heard a big thump from the room followed by intense crying. The little one (4,5 years old) had fallen of the bed and hit her head. This was not the first time she did so, she had both hit her head many times before and fallen off the bed previously too.

After a bit of crying, ice on the head, and comforting hugs, I expected things to return to play as if nothing happened. They usually did. But not this time around. This time, things were different.

She complained about having a headache. She was tired and just wanted to lay down. She lay there completely still, and stared out into space. As time went by, I got more and more concerned. This was not good.

We have in Sweden a medical advisory number we can call, where nurses on the other end can help you make an assessment about your ailments, give advice on self care and whether or not you need to see a doctor. I called this number, and the nurse and I concluded that this was a case for the ER.

In the waiting room, my little one felt sick and wanted to throw up. By this time, I was simply hoping and praying that there weren’t any brain haemorrhage going on. When we got a room and waited there for the doctor to arrive my girl fell asleep on the bed, and I didn’t know if it was a good thing or a bad thing. Sleeping or unconscious? Would she wake again?

It turned out we were lucky. It was just a mild concussion. And it was long past her bedtime by the time we got the hospital room so no wonder she was tired and wanted to sleep.

I got to go home with her immediately and received a sheet of instructions about how to take care of her in the following days.

Firstly, she shouldn’t go back to child care / kindergarten until she had returned to normal appetite and mood for at least 24 hours.

Secondly, she was to have brain rest. This meant no moving pictures, no computers or screens of any kind, no mentally activating games, and no reading. I could read to her, but she shouldn’t read herself (not that she was able to at 4,5 years old, but the instruction sheet was a standard one given to all children irrespective of age). This need could persist for a while longer, up to weeks after the incident.

So brain rest is important for recovering from head injury. And I got reminded of this trip to the ER by the following tweet: 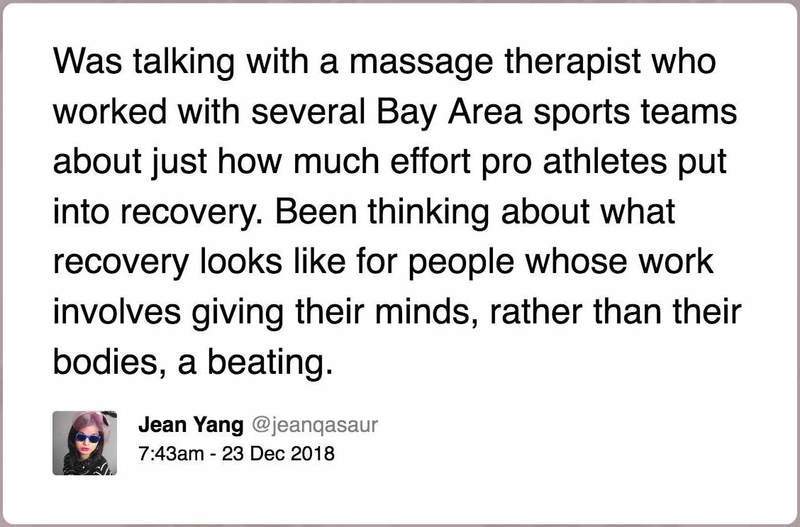 This got me thinking. During my burnout and coming back from it, I had no choice but to be very careful with what kind of stimuli I exposed myself to. And after injury or trauma, we have clear guidelines of resting and rehabilitation.

But how much do we give the brain a chance to rest when we are in good health?

Yes we do. Just like over-training physically breaks you down, not giving your brain a regular break is going to have huge detrimental consequences.

I have a close friend who went through a stroke, and the advice given for the brain fatigue that follows in the wake of injury is something that can be useful and applicable for all of us when we want to consider giving the brain some rest and time off.

This listed selection is taken from the advice given by the main hospital in my city to patients suffering from brain fatigue:

There’s one glaring omission on this list, and that is meditation. They do include mindfulness, but it’s not the same thing.

Is meditation brain rest or not?

I wonder if the reason they don’t put meditation on their list is simply that they – as a medical institution – only will include things confirmed through peer-reviewed research, and that there is little research available about the specific combination of meditation and brain fatigue recovery?

I haven’t looked into it though, if you know anything about it I’d love to know. It’s not like meditation is an un-researched territory.

I received tremendous help from meditation in my burnout recovery. So this leaves me wondering if doing it for stress alleviation is something different from brain rest.

Meditation undeniably requires a certain kind of focus, and is a skill that gets better through deliberate practice. And while it’s definitely a rest for the mind and its constant chatter, could it be considered rest for the brain? Perhaps the person with brain fatigue simply would not be able to muster the concentration of meditative practices? But it might be brain rest for otherwise healthy individuals?

For me, one the most restful things I’ve found is walks outside in nature, preferably forest. It’s like replacing harsh inputs with soothing ones, for many senses at the same time. Sight, sound, smell and kinaesthetic. I haven’t tried a sensory deprivation tank though, perhaps that’s the ultimate brain rest of them all?

What I’d like to propose for you, is to reconsider whether watching that Netflix series in the evening is the best way to relax after a busy day. And to balance a long focus session with something else than a social media spree.

While it might feel relaxing on the surface, your brain would probably disagree with you.